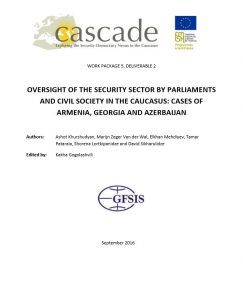 affects the prospect of democratic development of countries. The past and recent history of all three South Caucasus states involves the Soviet legacy and continuous internal conflicts and wars, political instabilities and violence. These circumstances has caused the securitization of the political environment and practically all areas of public life and favour the concentration of excessive powers in hands of the military and law enforcement bodies. In some cases the political order relies on institutions or key personalities in army or law enforcement structures. Obviously, the weakness of democracy calls into question the ability of institutions and the general public to oversee the actions of the security bodies.
Parliamentary and civil society oversight of the security sector are two important dimensions of good practice of civil military relations, along with a clear division of authority between the Head of State, Head of Government and the security sector ministers, as well as peacetime governmental (executive) direction through security ministries, in democratic societies.1 Civilmilitary relations are being accepted as an element of democratic accountability under a parliamentary system, recognizing the primacy of politics over the military. Patterns of civilian control vary with changes in domestic ideology, domestic legal institutions, and external threat…Continue reading GFSIS Working paper