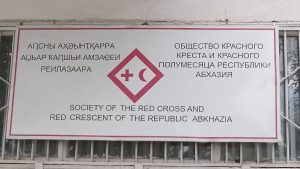 “Abkhazia, a place where cross and crescent work together” © Florian Mühlfried

In September and October 2017, CASCADE researcher Florian Mühlfried has conducted three weeks of fieldwork in Abkhazia. The fieldwork was embedded in his participation in WP6 dedicated to “Religion and Politics”. The main focus of this exploratory trip was and the relation between the state and the three instutionalised religions in Abkhazia.

In Abkhazia, religious pluralism is a state-sponsored project. In Addition to Orthodox Christianity and Islam, so-called traditional religion has gained official recognition. Multi-culturalism and secularism are the ideological underpinnings of state-practiced religions pluralism. This differentiates Abkhazia from other de facto or de jure countries in the Caucasus where the project of post-soviet state making is tightly interwoven with the revival of one religious institution such as Orthodox Christianity (e.g. in Georgia) or Islam (e.g. in Chechnya). 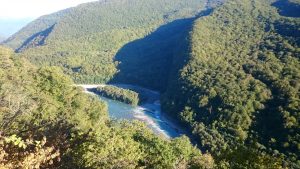 Fieldwork was mainly taking place in the Abkhaz capital Sukhum(i) and consisted of interviews and participant observation. Trips to sacred sites such as churches and “folk shrines” completed the picture. Overall, the main task of this fieldwork project was to allow for comparisons with other parts of the Caucasus the fieldworker Florian Mühlfried is more familiar with.